I had all the right intentions in the world on Saturday.  We were going to go out to breakfast, something we haven’t done in over 14 months, and then walk to the Dragon Races downtown.  I woke up with great intentions and a great mood, the day, however, end the polar opposite.  While we were at breakfast I was like a little giddy school girl and that annoying customer, remembering things I wanted after the waitress left the table, I was ashamed.

The conversation consisted of our future and where it was headed.  It was more nerve-wracking than I had expected.  The visions of new jobs in offices, new people and working without Rob (the first time in our 11 year relationship) freaked me out more than I realized.  I told Rob we needed lemons, and that’s where it all fell apart.   While I’m 100% sure he didn’t say what I heard, it sent me into a tailspin that I couldn’t recover.  The six blocks from the restaurant to our apartment was silent, awkward and sad.  I had done so great the last six days, what happened? Lemons had caused me to come unzipped.

There were no Dragon Races for us, just a day in separate rooms (which is a feat in a two room apartment) and me developing an angry relationship with CraigsList.  I didn’t want to apply for any of the jobs I saw online, and there were a lot.  A lot I was qualified for and a lot I wasn’t, but for some reason I found myself honing in on the warehouse jobs.  I just need a job where I wouldn’t be around anyone, because obviously, I’m not fit for human interaction.  This made me sadder than the conversations about lemons.  It was all starting to crash in, what had I done?  I shut down my dream, and now I was second guessing that decision, that is until I bent my thumb the wrong way, and it all came painfully right back into the front of my mind.  Pain, that’s why and that made me even sadder.

Saturday was a dark day, probably the darkest yet, but with a box of Captain Crunch Berries and a bowl of lemons, Rob managed to bring me back into the light.  Eating Captain Crunch out of the box for dinner, I vowed Sunday would be better.

Sunday has been better.  I made our traditional Sunday breakfast of eggs, breakfast potatoes, toast and veggie bacon (even Grace got scrambled eggs!).  We settled on the couch and turned on the DVR to Sunday Mornings with Charles Osgood.  With the house smelling of fried potatoes, the sound of the Sunday Morning theme song playing and Grace snoring on the couch, I was instantly comforted.  This is how life is supposed to be, relaxing, comfortable Sunday mornings with the people and things you love the most.  It’s a new day, and I think things are back on track. 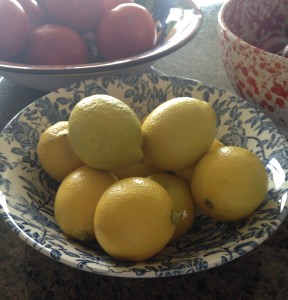