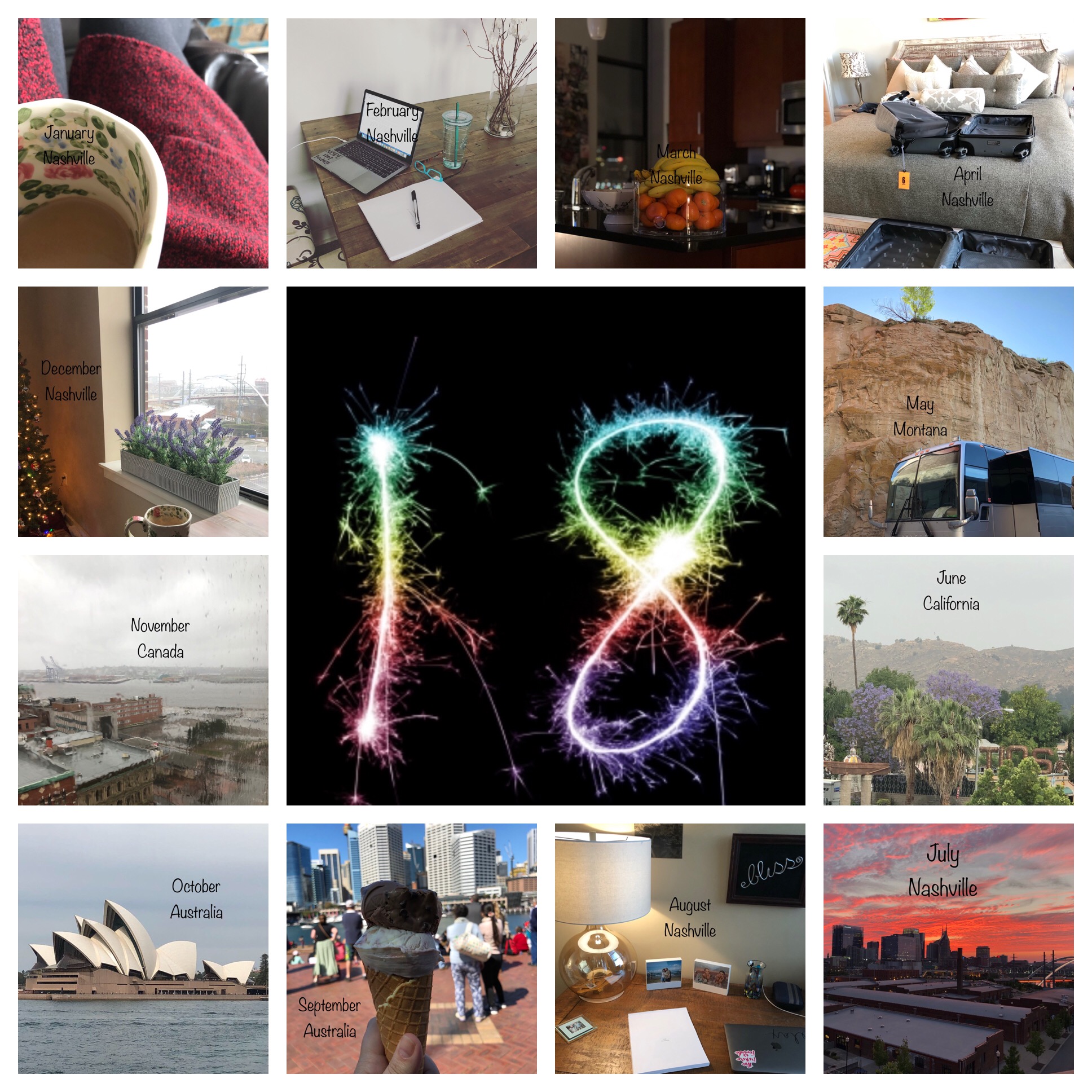 This time of year I always get reflective.  I have long ago abandoned the idea of Resolutions and instead, I usually take a few minutes and flip through the photos on my phone. I am always amazed at all the things that have happened in just one year and this year was no different.  I traveled, traveled so much, wrote a book, and spent time with my family.  It was a busy year indeed, and that photo at the top of this post is just a brief glimpse of all the things I did.

January – This month started as recovery from December 2017 (where I also did a lot of traveling). I spent most of this month at home. I slept a lot, kissed my chickens, and spent a lot of time in coffee shops writing my book.

March – In March, I ventured out a bit and saw a play, but mostly I just spent my days writing, because I knew I was running out of time, I could hear my suitcases calling me.

April – This was when the year started to get busy.  I packed my bags and went back on the road.  In April, I was in New York, South Carolina, North Carolina, Washington DC, New Jersey, Long Island, Connecticut, Massachusetts, Upstate New York, and Ohio. I started touring again with the PJ Masks as the Road Manager, and it was exhausting.

May – May would find me still touring the PJ Masks, and I was in Indiana, Illinois, Missouri, Iowa, back to Ohio, Wisconsin, Minnesota, Kansas, Nebraska, South Dakota, Colorado, Wyoming, Montana. It was a lot of states in a tiny amount of time.  A lot of time spent on the bus and taking showers in gross theaters showers. By this time of the year I was over touring, over the PJ Masks, and ready to come home. The highlight, however, of this month was that I actually got to drive the tour bus. On the actual road. It’s a lot easier than you think!

June – By the time June rolls around, I knew I only had a few short weeks and states and then home sweet home.  In June I was in Washington State, Utah, Nevada, and California. In Utah, I got to see the Mormon Tabernacle and toured its grounds.  They try really, really hard to convert you when you are touring the little church on the grounds and have a six-story statue of Jesus in their reception area.  Surprisingly, I was NOT struck down by lightening and counted that as a win. In California, a huge tree branch fell on my tour bus, and I took that as a significant sign it was time to head home. I got home just in time to hold my baby chicken’s hand as she headed into ankle surgery.  Aside from taking care of her, the rest of the month consisted of catching up on my sleep.

July – This month was just sleeping and writing.

August – I finally finished my book this month and was so proud of myself. I also decided to go back on the road with the PJ Masks.

September – I got on a Business Class flight to Australia and am sure I will never fly coach again.  This month I was in Sydney, Perth, and Brisbane.  I got to pet so, many, kangaroos, held a koala and saw bats the size of a newborn child. This was the first time I toured without my husband, and that was more empowering than I had expected.

October – I was still in Australia and went to Sydney, Adelaide, and Melbourne for half the month, and then I headed to Canada. I saw the Sydney Opera house, went whale watching, went to a fantastic Art Museum, got locked in a stairwell, discovered all the croissants, and closed out the PJ Masks tour.  It would be the last time I toured with that group of kids and the PJ Masks; I was headed to Canada the middle of this month. I jumped on The Thank You Canada Tour and was in Calgary, Regina, Medicine Hat, Brandon, Sault Ste. Marie, Toronto, Barrie, Oshawa.  I was back on a tour bus and befriended Olympian Figure Skaters. This was also the month I got to drive the Zamboni, all by myself!

November – I am still in Canada and saw London, St. Catharines, Kingston, Peterborough, Quebec City, Moncton, Saint John, St. John’s (yes it is an entirely different place from Saint John), and then home.  This month I had 2 Olympic Figure Skaters teach me how to ice skate. I also rode on a tour bus for 42 hours straight through 3 snow storms from Saint John to Nashville.

That brings me to December. Time to build my gingerbread house, bake cookies, and put up a Christmas tree. I am catching up on my sleep and battling bronchitis. I am so happy to be home and so thankful for 2018. It was a year of travel, meeting new people, making new friends and accomplishing goals.

I’m not sure what 2019 is going to bring, but I’m hoping it’s less traveling and more staying at home, but time will only tell. I hope your year was an amazing one!