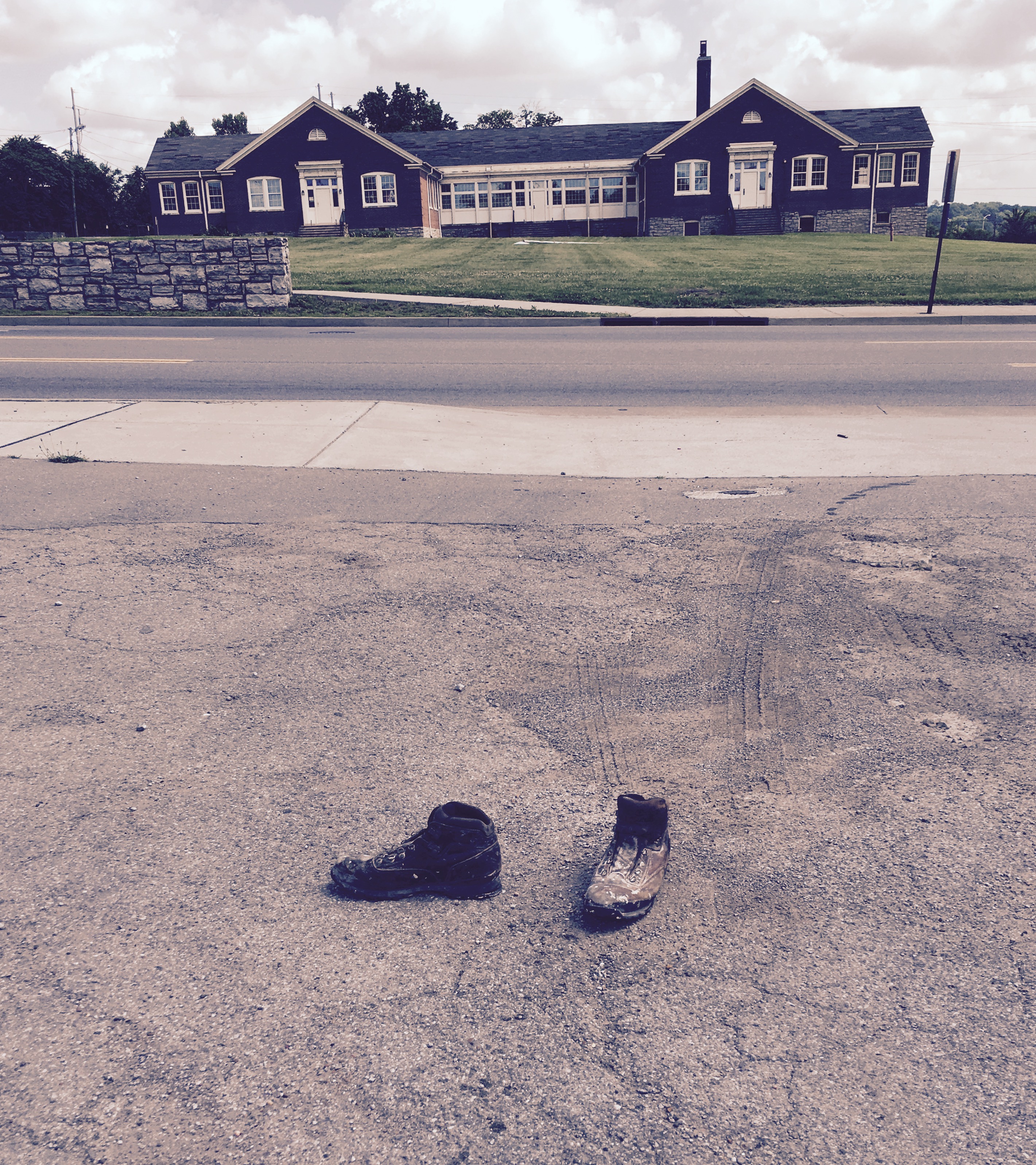 I had been driving by this abandoned garage all day delivering groceries when finally, on my last time around, I looked over at the parking lot and saw a pair of shoes.  Those abandoned shoes were just sitting there in the middle of the parking lot, all alone. I was so drawn to those silly shoes, I actually pull into the lot, got out, and just stared at the shoes.  They were battered, had no shoelaces and were sitting there like someone just walked right out of them, or maybe they were raptured, either way, I just stood there and just stared at them.

I snapped a few pictures of the shoes, got back in my car and headed to the grocery store to finish my last shop of the day, but I was distracted, I couldn’t stop thinking about those shoes. Who did they belong to, and why did they just leave them there?  These shoes were downtown, well because I live downtown, and that’s why I saw them.  But our downtown, like every other big city, has a substantial homeless population, and that is why I was even more intrigued by the shoes. If the person who left the shoes wasn’t homeless, then why hasn’t some homeless person grabbed them?  While I was working, I started to create scenarios in my mind for these shoes and the life that belonged to them.

Did they belong to a painter who had been painting the new apartments that were across the street from the abandoned garage? I had imagined that he was done working for the day and pulled over to change his clothes because he was late for a first date.  It had been years since he was in a meaningful relationship. He had been talking to this woman for some time now, and they finally agreed to meet.  He was so preoccupied trying to get the paint off his hands, changing in his car, and the chance at true love that once he got dressed, he just drove off, leaving his shoes behind.  Like he was leaving his old life behind to start a new one, a better one.

Or did they belong to a man who was walking with his wife and in the Tennessee heat he just collapsed.  I had imagined the wife called 911, and they rushed this man to the hospital. Once they had him stabilized, the old man asked about his shoes. They were his favorite shoes; he had seen so many of life’s most significant moments in those shoes. He was wearing those shoes when he proposed to his wife on a hike to the waterfalls. He was wearing those shoes when he was painting the nursery for their firstborn.  He was wearing those shoes when he was mowing the lawn and got the call that his father had died.  But, in the commotion of it all, the shoes got left behind, and they were the last thing on the woman’s mind.  They had children, a life, a life she couldn’t imagine without him.  In the ambulance, she told her husband, “Don’t you worry about those old shoes; I hated them.  We will get new ones when you get well.”  A week later the man was discharged from the hospital, and he insisted the first stop was to the shoe store to buy some new shoes.  The doctors had given him a new lease on life, and he needed a pair of shoes to walk into the future.

Or did they belong to some hipster who had abandoned his car and decided he was going to walk everywhere (not really a far fetched thought)?  He had found these shoes at Good Will (again, not so far fetched) and thought they possessed the exact life he wanted.  As he was walking to his hipster coffee shop, three blocks away he realized being a hipster wearing old used shoes was no longer cool and he just stepped right out of them and left them where they were.  He started walking the few blocks to his hipster coffee place barefoot and started a new trend where all hipsters now walk around Nashville with no shoes (again, not such a far-fetched scenario).

In the days after I stopped and took the picture, those shoes have slowly made their way to the sidewalk, which is even more odd to me than their very existence. Why do those shoes keep moving closer to the street? Does someone keep trying them on, walk a few steps in them and take them off because they don’t feel right?

I don’t know what the story is with those abandoned shoes; I can only hope the former owner walked into a better pair of shoes, and someone gives those old shoes a new life.