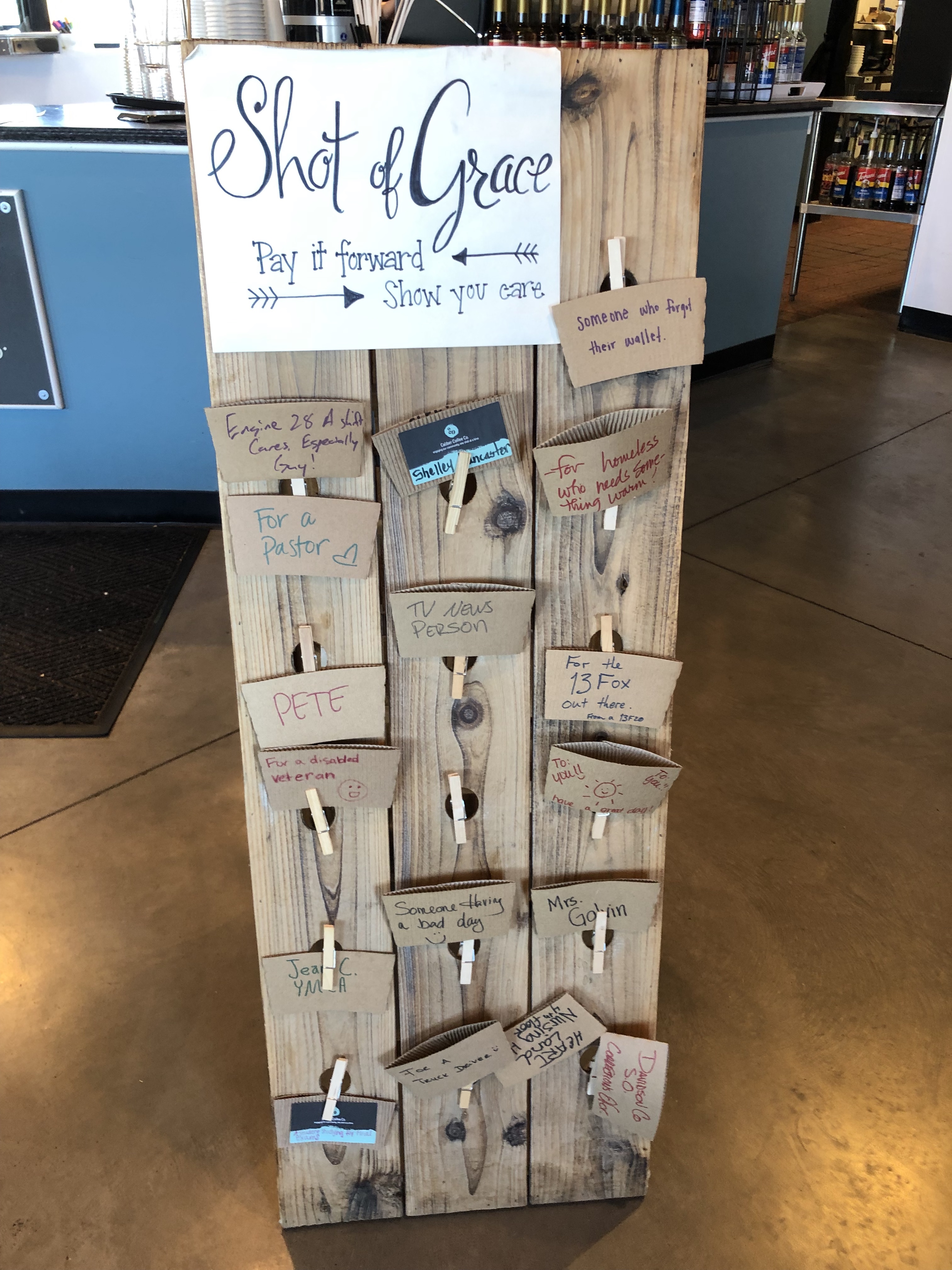 I know it’s been a while since we’ve sat down and had some coffee, partly because not much has been happening in my life these days, well until last Thursday.  With my husband out of town the first part of this week, I loaded my laptop into the car and headed out to a new coffee spot in Nashville.  I think this coffee shop, Caliber Coffee, will be my new writing place for one reason; they have a board filled with coffee sleeves, called “Shot of Grace.”  You can buy a coffee sleeve and put it on the board; anyone can pick a sleeve from the board and get a prepaid coffee. I saw sleeves on that board for Single Mom, Veteran, For a Peter, Someone Visiting. It was amazing, and it made me proud of my city.  Of course, I added a sleeve to that board (can you guess which one is mine?)

I order a large iced coffee because it’s the second week in April and 80 degrees in Nashville, settle into my seat, among what looks like other writers and open up the Add New Post in WordPress and start typing.

If we were having coffee, I’d tell you about last week, where I finally signed a publishing contract for my book Frank. It didn’t happen overnight, and I had been sitting on the deal for all of March, because, well, Mercury Retrograde and part because I was having a tough time believing it was real. Believing in me. But I took the leap and sent the contract back last Thursday and promptly got drunk! I’m excited and nervous, but mostly excited! I would tell you about all the hard work that book took, about how hard it was somedays to find words and how one sentence at a time I managed to string them all into a book that someone other than my mother liked, even, perhaps, loved.

If we were having coffee, I’d tell you how now my days revolve around conversations with my editor, again, finding words to fix the words she wasn’t sure about and designing book covers. It is exciting and scary all at the same time. The words I’m finding the hardest to come up with these days are words for the dedication of the book. I’m finding that to be almost harder than the actual book itself.

If we were having coffee, I’d tell you that I had a long conversation the other night with my baby chicken and her boyfriend about marriage. I tried to hold back the tears at the thought of that sweet little girl being somebody’s wife and I, once again, worried what my two divorces did to her views of marriage. I would tell you that I hoped my chickens would not follow in the footprints that I left for them early on and hope that they look at my current marriage, that turned 14 years old this week. I hope when they look at all the hard work, my husband and I put into this marriage, they come up with something other than divorce. I hope they see how it wasn’t all tiptoeing through the tulips and that there were plenty of days that the sun didn’t shine at all. I am so proud of those 14 years, and I hope they learn from them that you don’t always give up when things are hard.

If we were having coffee, I tell you that aside from some personal travel, I will be home until the Fall.  That means no touring, no tour buses, and no actors, ice skaters, or musicians and I’m good with that.  I have the choice of two tours in the Fall and, at the moment, I don’t think I know which one I want.  One might let me have coffee with you in real person; the other will leave me wandering around Canada, yet again.

If we were having coffee, I’d tell you about the movie The Public and the show New Amsterdam. I’d ask you to make it a priority to see both, but I’d also tell you how I left the movie theater feeling overwhelmed and helpless. Without giving too much of the story away, it’s about a group of homeless men in Cincinnati in the winter.  They stage a protest for lack of homeless shelters in the city and refuse to leave the public library at closing. There was a part in the movie where I was crying like a baby, and it made me realize that no matter how shitty our world seems right now, there will always be good people, people who want to help each other no matter what. In the show, New Amsterdam the main character says “How can I help?” at least 50 times an episode, and as I sat on my couch binge watching that show, I’ve decided that would be my new motto, and I want you to adopt it as yours also.  If every person just said “How can I help” if even just once a day, think how amazing our world could be. So, how can I help?

If we were having coffee, as usual, I would have occupied the conversation. We would catch up on your life, and I would promise if my work life brought me close to you this Fall, we would finally have coffee in real life.

One thought on “If We Were Having Coffee – Part 6”