I wasn’t going to post about my very very long flight from Los Angeles to Sydney in fairness to everyone else who was flying the same route, but to be honest – I don’t know how I couldn’t.  You see I was flying First Class from Nashville to Perth on three flights. The first flight was from Nashville to Los Angeles and that was your typical First Class seat. I have never been comfortable flying First Class but have grown used to the sideways glances you get from people walking to the back of the plane. I have long ago shaken that uncomfortable feeling for the larger seat, the attentive service, and leg room you get from sitting in the front of the plane, but an International First Class ticket was something I have never experienced before and with the exception of flying home, not sure I ever will again so I felt it only right to document it, so here we go.

As I was walking onto the plane with my traveling partner, Will, I was a little apprehensive, not knowing what to expect. “You’re gonna love it Gina!” he says, and as I’m shrugging my shoulders not believing it could be any different than the flight from Nashville to Los Angeles I found my seat. I don’t even really think you can call it a seat, it’s more of a pod.  I was as excited and I was overwhelmed.  So much space, there was a 21 inch screen in front of me, to the left of me there were three compartments that had power and little spaces to put your things in as well as charge everything, your phone, your watch, your computer, your iPad, EVERYTHING there were so many outlets I felt almost guilty. In the larger compartment there was also a remote to play video games on the tv.  As I sat down in the seat my elbow bumped a little screen and when it turned on there was a picture of my seat and all the things it did.  That’s right, my seat was electric, no little silver button on the side, with the touch of the screen I could have the leg rest come out, or I could recline the back a bit or I could recline the seat all the way to a completely flat surface.  This was a game changer folks.  I would have been happy with all this, but there was more!  There was Kenneth!

Kenneth was my flight attendant/butler. I wasn’t sitting down for five minutes when he came up to me and asked if I’d like a glass of champagne, orange juice, sparkling or flat water.  At the same time, he handed me a pamphlet of some and as I was opening it I realized it was a menu with a card inside. Kenneth ever so politely asks if I could please make my breakfast choices and get those back to him as soon as possible.  He was kind enough to tell me where the nearest bathroom for me was, which was right past the bar (yes, there was a full-sized complementary bar four pods in front of me). He also handed me a toiletry bag that has an eye mask, toothbrush, and toothpaste (for which I was very grateful as mine was in the bottom of the plane in my suitcase) socks, earplugs, tissues and face wash, and lotion.  Just as fast as Kenneth arrived at my pod, he as gone and onto 11D.

A few minutes later, as I was trying to figure out what to do with all my space and compartments, there was Kenneth with my water (in a glass) and proceeded to tell me all the features of my pod.  He was so fast, I’m not sure if I remembered any of them but before I could ask a question he was gone again. While I was cleaning up my pod, because frankly I was overwhelmed and had stuff everywhere, I had my book, my laptop and charger, my phone and its charger, my iPad, my newly acquired toiletry bag all of which I had no idea what to do with it all, I turned around and there was Kenneth. He just appeared and was handing me yet another thing, it was a mesh bag that contained pajamas.  Yes that’s right pajamas! Oh and yes he also collected my breakfast order. Folks, all this happened BEFORE the plane even left the ground.

After about an hour into the flight was a three-course meal with wine pairings.  Now my body thinks it 3:15 AM and Kenneth was acting like it’s 4:15 PM the next day.  I looked at the menu and I was so tired I didn’t really have the energy to eat and when Kenneth came to my pod, squatted down so we were eye level he asked what I would like to eat, I told him I was ok. Kenneth was a little surprised I didn’t really want any wine or the dessert or really dinner for that matter, and he really wasn’t having any of that so I buckled under pressure and ordered the following: Starter:  Rocket, walnut, radish and grape salad with a herbed buttermilk dressing. Main Course:  Mushroom rage with Parmesan polenta, spinach, tomato, and green olives. No dessert because I wasn’t feeling the ice cream or cheesecake.  (I’m sorry but I didn’t take any pictures, but the food was amazing!)

As I sat in my pod all cozy in my pajamas, which by the way, I didn’t think would fit, but as I’m learning, Kenneth is always right, eating my Amuse Bouche of almond stuffed green olives, I felt like I would never be able to fly any other way, except maybe private.  At this point, I am fighting the urge to fall asleep face first into my salad, but I power through, if only not to disappoint Kenneth.  When Kenneth came by to make sure I hadn’t changed my mind and wanted dessert, I told him no, I was just really ready to go to bed and he said the following to me, “Alright Ms. DeNicola, I’ll have them make up your bed” and with that, he was gone.  Not two minutes later a completely different flight attendant came to me, I got out of my pod, and she put the seat into a completely flat position, put on sheets and a comforter and was gone. I crawled into my pod, under the covers looked up at the ceiling and it had twinkling “stars”. I put on my eye mask and fell asleep feeling like a queen.

For the sake of time, I’ll tell you that when I woke up and changed into my clothes I had breakfast of an eggwhite omelet, sauteed mushrooms, spinach, and a croissant.  There was also coffee.  When we landed in Sydney I felt surprisingly refreshed.  I had one more flight and then I’d be at my final destination, Perth, Western Australia.

This last flight was only four hours and I had assumed I would be sitting in a regular first class seat, but I was wrong. This time my Flight Attendant/Butler was Brock and he was equally as attentive as Kenneth.  I had all the same amenities in this Pod as the last.  Brock handed me the same pamphlet for Lunch and I had Jamon Serrano with caramelized pear, goat’s curd, basil and balsamic for my starter and for my main I had Tabbouleh with heirloom tomatoes, baba ghanoush, pistachio, and pomegranate. No dessert again.  This time I did remember to take a picture!

All in all, I don’t think I will ever be able to fly coach again. 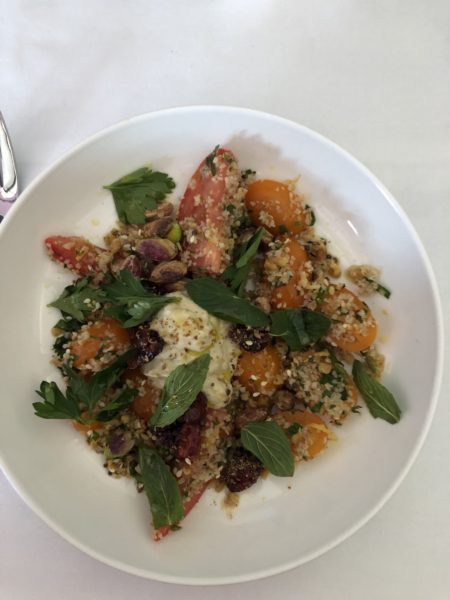 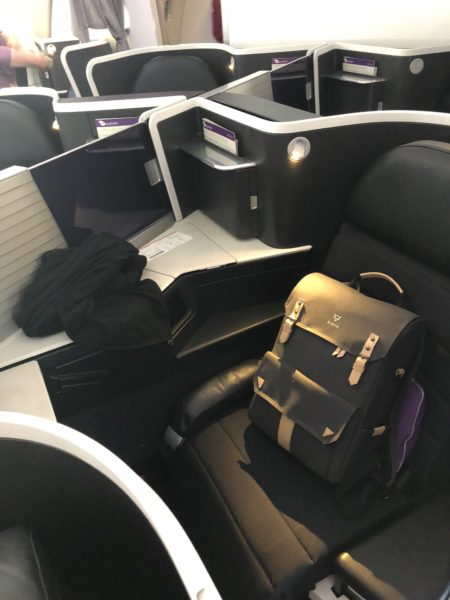 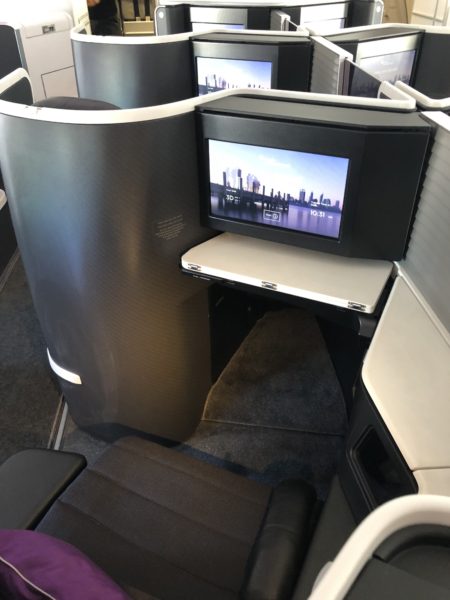