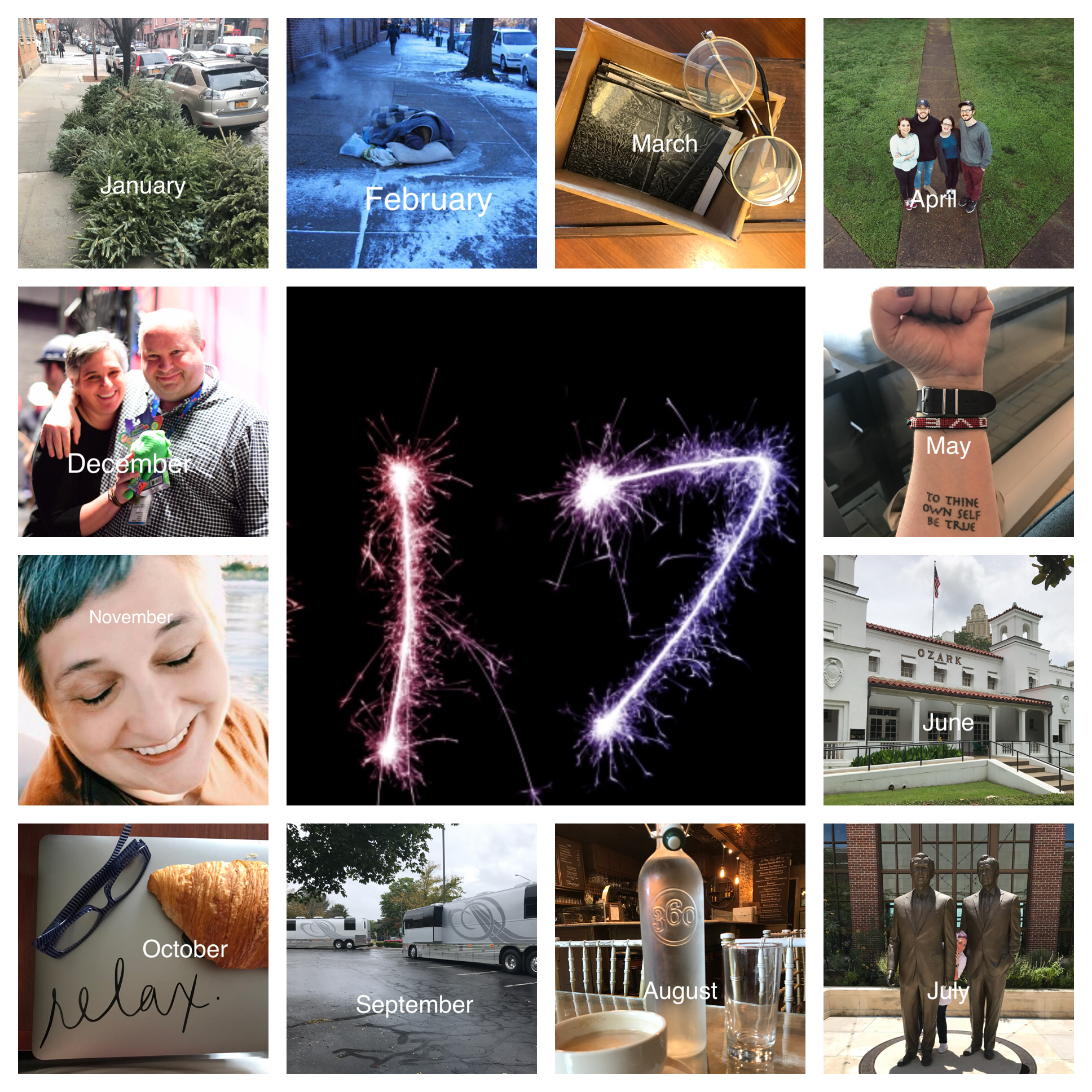 I know Instagram has your most liked nine pictures of 2017, they will put them all together so you can remember the year, post them, and share them with everyone. Heck, I even did it, but I thought I could come up with better pictures than Instagram for 2017.

2017 brought me to so many different places, so many life-changing events, and then returned me home again.  Here is a recap of my 2017.

January 2017 – January continued with me living in New York City and running the Rolling Stones Exhibit in the West Village. Thankfully, January was unseasonably warm for New York, but she did force me to purchase a real winter coat (which has been sitting in my closet collecting dust). January of 2107 also brought the Women’s March and gave me a feeling I can’t even begin to put down on paper.

February 2017 – February I was STILL in New York City, but it was also the month I turned 50. I was able, through the help of strangers, family, and friends, to raise over $6,000 for coats/sleeping bags for the homeless (you can read all about that here). I was overwhelmed with the amount of kindness that surrounded me.

March 2017 – March I was, yes you guessed it, still living in New York City and by now Mother Nature was done playing nice. I was over the half mile I had to walk from the Subway to the venue every morning, and I had my fill of listening to Rolling Stone’s music on repeat. March also brought the death of my father (which you can read about here). That brought so many repressed feelings that I didn’t know how or what to do with so of course I wrote them down and worked through them. For once I was thankful to be in New York City so I could take the train and connect with my father’s brother and my aunt. They helped me work through my feelings and told me stories of my father I had never heard.  In March, I also saw Chris Rock in concert, got to spend more time with my Chickens, and learned how to ride a skateboard. I finally got to leave NYC and head home for a hot minute to thaw out before I was on the move again.

April 2017 – April brought me to Chicago, IL and more Rolling Stones Exhibit, which brought more Rolling Stones music on repeat.  Thankfully that gig didn’t last as long (for me anyway), and before I knew it, I was on a plane again.  This time we spent a week in Toronto looking at apartments trying to fulfill my New Year’s Resolution of getting out of a Trump world.

May 2017 – May brought me back to Nashville, the Predators and Hockey fever, and Orange Theory (which of course you can read about here) and changed my diet to a vegan diet.

August 2017 – August provided me the chance to be brave and enter the chocolate shop that use to be my bakery for the very first time.  I stayed for a half hour, and that was a half hour longer than I thought I would last (of course you can read about that experience here). I learned that I could be brave, even if it were for a minute.

September 2017 – September brought my mother’s 13th grandchild and the start of my new job. I climbed on a tour bus with 11 actors I didn’t know but was somehow in charge of making sure they made it to every show on time and in one piece. In September I traveled to New London, CT, Baltimore, Philadelphia, Charleston, WV, Grand Rapids, MI, Cleveland, and Chicago. I learned how to shower in gross venues and learned to love my coffin like bunk on the bus. I quickly became the mother of 11 more chickens and loved them almost as the original two.

October 2017 – October continued with the tour and landed me in the cities East Lansing, MI, Cincinnati, King of Prussia, Boston, Toronto, Kitchener, New York City, Scranton, Wilkes-Barre, PA, Fayetteville, NC, Augusta, GA, Atlanta, Nashville, Chattanooga, Charlotte, NC, Huntsville, AL, Tallahassee, Fort Meyers, FL, Tampa, Ft. Lauderdale, Panama City, FL. By this time in the year I’m exhausted, needing a haircut, lost 15 pounds, and longing for home.  But something happened in Panama City, Florida and I was proud of myself. I felt accomplished, and I was the most secure in who I was in a really long time.

November 2017 – Yes, I was still on tour in November and had seen the cities of New Orleans, San Antonio, Sugar Land, TX, Dallas, Oklahoma City, Little Rock, Austin, Tulsa, Kansas City, MO, Louisville, KY, Indianapolis, Detroit, Pittsburgh, Warren, OH, Minneapolis, Milwaukee, Appleton, WI, Ralston, NE, Loveland, CO, Alburguerque, MN, Phoenix, Las Vegas, Santa Rosa, CA, Portland, OR, and Nampa, ID. November also showed me what it was like when someone you hardly know, but work with dies (yes, don’t worry, you can read about that one here). November also gave me a scare I didn’t talk to anyone about; I found my husband at the bottom of 20 concrete stairs that he had fallen down.  He was fine, probably had a concussion, scraped up pretty bad, but okay. But as I laid in my bunk on the bus that night, I cried. I let my mind wander and thought about how bad that fall could have been, was afraid I could have lost him and what would I do without him in my life. I didn’t know, and it was scary.

December 2017 – December brought the tour to an end, but not without visiting Eugene, OR, Seattle, Spokane, Vancouver, Prince George, British Columbia, Alberta Canada and her cities of Grand Prairie, Edmonton, Calgary, Red Deer, and Medicine Hat.  Then there was the end of the tour in Winnipeg Manitoba, where they most CERTAINLY keep the cold. It was time to say goodbye to my 11 new chickens, and there was a lot of shots involved.  I believe there is even a video of me dancing to one of the songs from the show…it’s not pretty folks. I was home in time to spend Christmas with the original Chickens and a quick trip to St. Louis and then home on New Years Eve day.

2017 had it’s ups and downs, highs and lows, laughter and tears. I grew as a person, and I grew as a professional. I got to travel the Country and Canada with my husband and checked somethings off my bucket list.

I am not really sure what 2018 has in store for me, but I hope 2018 brings hope, love, and laughter for not only me and my family but for you and yours.