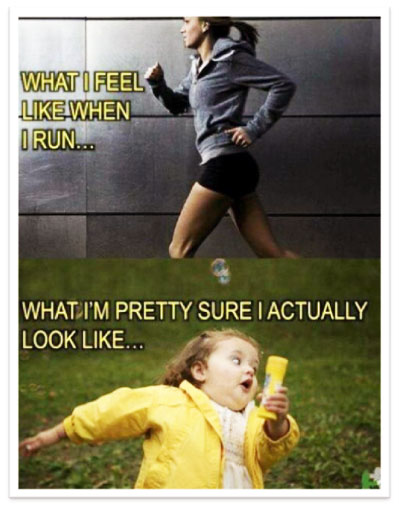 I’ve had this crazy secret goal for ten years. I consider it a secret, well up until now, because if I didn’t say it out loud, people wouldn’t know it or see me fail. Crazy because well, if you know me you know I hate to run.   The goal? To run a marathon or 1/2 marathon before I turn 50 and now time is running out on me.

So last week I dusted off my couch to 5k app, you’ve got to start somewhere right? Found a future race I wanted to run in and then proceeded to spend the morning in front of the tv.

The reason I spent the morning on the couch was because I had so many things running through my head I was afraid to move off the couch, ironic I know since I just downloaded the COUCH to 5k app.   These are just a few things making the rounds in my head. How was I going to train in Albany NY in the winter? What was I thinking? How would I run with my asthma, especially in the winter? Now the five people who read my blog would witness me failing or succeeding if I’m looking at the glass half full. But the big thought running through my head was, am I capable of running 13.1 miles?

You see, when I set goals for myself, I set myself up to fail from the start. I set such out of reach goals that they are hard to accomplish. For the first time in my entire life, I’ve decided to set an attainable goal first and then build on that goal.  Instead of setting out for a marathon right away, my first goal is to finish the entire Couch to 5K program. Nine weeks, three times a week and then move on to a Couch to 10K, then move on to a Half Marathon. I also think I’m going to modify my goal, for now, to a half marathon and then, if at the end of the training and if my old body doesn’t feel like it’s going to fall apart, maybe I’ll train for a full marathon.

One of the problems I will encounter with this goal is I’m a lazy person.  I always have been and not just a little lazy, like really really lazy. I could very easily sit on the couch for days on end watching Netflix. But I have also had the good fortune to experience the runner’s high, it’s real and amazing, but usually the laziness wins. The hardest part for me will be the actually getting out there and going for a run. One of my other problems is that I hate running.  Mostly because I run too fast, you know to hurry up and get it over with. Then I become so out of breath that I am sure I’m going to have a heart attack. I also have asthma, which makes it hard to run and even harder in the winter. The last problem I think I’ll have to overcome is my family, more specifically my husband. You see, I’ve started this goal before, and they have watched me start it and give up. So when I mentioned it to Rob, his first response was laughter, and then I believe he said “we’ve been down this road before.” His reaction is completely understandable and justifiable. I’m pretty sure I had the same reaction when I said it out loud in my head. But maybe, just maybe, if I put it out there on the world wide web and tell the few people who read my blog, I will be accountable and less likely to quit, maybe.

I figure if I can accomplish a life long dream and goal of opening a bakery, surely I can train my body to run 13.1 miles. Some might say making croissants seven days a week for 14 hours a day is much easier than running 13.1 miles. However, my thumbs and wrists would beg to differ. So here we go, another goal, another dream and I know I can do it; after all I was the owner of flour. sugar. eggs. for a year.