I know I’m supposed to have my shit together by now, after all, it’s been 44 days since I closed the bakery. However, yesterday, as I laid in the fetal position on my bathroom rug, crying uncontrollably, I thought to myself, I should be over this, I should be happy, I should be composed. Yesterday, I was not any of those things. I was the opposite of all those things.

My hearing and comprehension are at best, 25% when I first wake up and before coffee. I am often in a fog so thick it’s a wonder I can operate the stove for my French press. My husband has successfully learned through the years we’ve been married, to leave me alone and certainly not ask or offer any life-altering questions until I’m on the couch and through at the very minimum half a cup of coffee. Yesterday morning was not one of those mornings. And what I heard, I’m sure he didn’t say (yes this happens often).  But it sent me into an uncaffeinated, hormonally challenged spiral.  I ended up on the bathroom rug in the fetal position wondering if my insurance covered unlimited stays in the psychiatric ward and if I’d have to have a roommate. 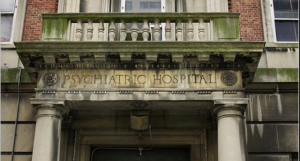 So many uncertainties in my life right now and for the control freak with a side of OCD, it is, some days, too much to handle. What I heard my husband say to me yesterday morning was that they hired two new bartenders, but I had to work out the current schedule until they could start. The current schedule was four days into fourteen days in a row, which meant, in my mind, that I was going to have to work the next ten days straight. That folks, is what put me head first into my downward spiral. From there I, logically, went to nothing is 100% nailed down yet job wise.  Where are we going to live?  Being away from the kids, Ali living in Memphis for four years.  Raymond somehow turned into an adult when I wasn’t looking.  And quite possibly having to give my sweet dog Grace away. It was too much, it is too much, and in an 825 square foot apartment it scared my husband right outside to “give me some space.” He didn’t run away from me, he knows me and knows that if given some space, I can usually talk myself off the cliff.  A feat old husbands could not grasp and what makes Rob the best man for me. By the time he came back to the apartment, I had not solved anything but did realize I had WAY overreacted. We both crawled into bed, held each other tight and took a nap.

I understand completely how a cranky toddler can go down for a nap and wake up like that sweet child you love. That’s what happened when I woke up. Yes things were still uncertain, but I didn’t have to work ten days in a row, I was smiling, and there were no tears. I will take that as a small victory.