The culmination of weeks of job hunting has boiled down to two specific jobs. Job one is a definite and job two is 95% a sure thing. Job one leaves next Tuesday, and job two would leave in two weeks. There are so many variables with both jobs when it comes to our personal effects, but both brought me to the most dreaded place on earth. Our storage unit. We got this storage unit almost two years ago when we moved downtown.  I have only been back to it when forced to get some goofy cable for Rob, of which he has hundreds for some ungodly reason. As I stood in the middle of this cobweb infested unit, I looked around at the stuff that I hadn’t needed in almost two years.  I  wondered how much someone would bid on it in an episode of storage wars.  All I wanted out of that 10 x 20 space was reduced to ten boxes, of which, I really only wanted two boxes. They contained baby books and my grandmother’s china. The storage unit trip got me to thinking about stuff, things, possessions. How much stuff do we accumulate and not need and how some people don’t have anything at all and need, quite possibly, everything we don’t need. It’s an unbalanced world, and I feel really good about giving most of my possessions away.

The other excruciatingly hard part of this new life is Grace. We rescued Grace when she was ten weeks old, and she has become my third child, attached to my side every day for five years. She cannot travel with me, and I am heart broken. We were lucky enough to find a Great Dane rescue that will take her to her new home in Indianapolis.  Grace will be with a family who has waited on a waiting list for a year to adopt a Great Dane. She will be in a house, not an 856 square foot apartment. She will have a yard where she can run around and not be tethered to a leash. She will have people who want her as much as I wanted her, and that makes me feel better, but it’s hard, really, really hard and I’m tired of the really hard things. I’m ready for things to be easy and fun with fewer tears.

With both jobs, we will be “homeless” traveling the world and when it comes down to it, aside from my clothes the only thing I plan on taking with me are these two pictures. 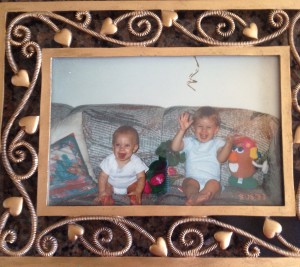 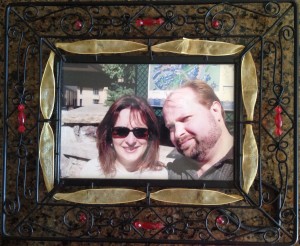 They are my world and a reminder that they are all I need. The accumulation of ten years of stuff has been reduced to two pictures. This process of closing the bakery and finding my new purpose has been hard, really hard.   But there have been three constant things, Rob, Ali & Raymond.   Those three people have made it easier to get through and knowing that they are always by my side, made me realize they are all I need, and every will need.

As I sit on my soon to be “not my couch” I realize I am more than ever ready for this new chapter in my life to begin. I am working really hard on letting go of my control issues and just going with the flow of things.  I have discovered the fewer things you have in life, the easier it is to go along with the flow. The LESS you have the MORE you can experience.