What do these seemingly unrelated cities all have in common? Places where Rob is looking to relocate and when I say, Rob, I mean, Rob and I.

Day 3 started out with me wanting to hang pictures and realizing we don’t have a hammer or nails. Who doesn’t own a hammer or nails? My father would be so disappointed, as 20 some odd years ago he bought his newly single oldest daughter a tool box with not one, but, two hammers. Where have those hammers gone? A hammer seems like a staple in everyone’s home, and now I was jobless and hammerless. Holding back the tears, because I promised myself I wasn’t going to cry today, I pulled out the drill and some screws and walked towards the first wall. Hanging pictures is usually, for me a very relaxing and instant gratification kind of project, however, using a drill, screws and a wobbly ladder, it was very much the opposite experience. An hour later, my apartment that had been lacking in personality was showing signs of “ohhh someone DOES live here other than a dog” which was my current decor.

After hanging the pictures, I once again laced up the running shoes and left my now cute little apartment. Wisconsin Dells, Albuquerque, Las Vegas and East Stroudsburg, those cities roaming around my brain trying to convince me they were the perfect city. I needed to get out of my head for an hour, so off I ran. 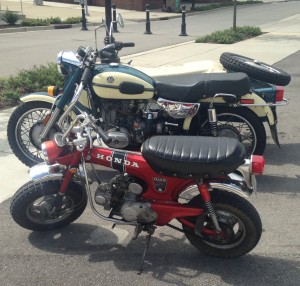 Nashville has recently been dubbed the new “IT” city.  Where riding things like this is considered hip and cool.   Eating desserts out of mason jars was cooler.  And eating things like Emu Wellingtons were the coolest. People who know me, know cool is not a word that describes me. I like plain simple classic things, and I do not have a competitive bone in my body and I don’t want to know how to make or eat Emu Wellingtons. Maybe Nashville is just too cool for me.

As I was running towards the downtown skyline, I tried to think of these other new towns, what they would be like and hoping that the hipster population was all but nonexistent. I suppose only time will tell, but I am NOT moving to a new town that thinks eating or drinking anything out of mason jars is cool, cause it’s not, it’s dumb!

On my way home from my run I noticed the Tennesseean wrote an article about my shop closing. When I read the article with tears in my eyes I thought, maybe an ashram or a silent retreat, that a dear friend told me about, maybe that’s what I need now, because I started to pick a fight with an idiot online who was telling me (yes I assume he was talking to me) I should have just hired someone to do the work I could no longer perform.

An Ashram and Silent Retreat seems that’s what my soul needs.

Then as I came up to my apartment building, there was this 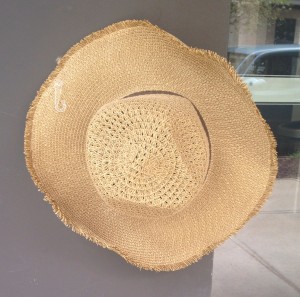 A simple little straw hat on the doorknob of the trash room. To remind me that simplicity is all around me, I just need to get out of my head and open my eyes.