My aunt asked me that question yesterday. “The question really is, what would Julia do?”.

What would she do I wondered? She wouldn’t be in this situation to start, but if she were, she would make the most of it I suppose. From all that I’ve read of her she was a carefree, devil may care person. Her thought on dealing rules was not even to acknowledge they existed. I started reading this book Julia Child Rules by Karen Karbo. She lists these in the first chapter.

“1. Living with Abandon, A La Julia
2. Make the most of the makeshift
3. Make it up as you go along; and
4. Make this your mantra: I’m never too anything for anything.”

I read those four rules over and over yesterday and decided they were, perhaps, the best rules I’ve heard in a while! But upon further reflection of the rules, I realized they were the scariest rules I’ve ever heard. They require one to toss out all sense of control and order and as a control freak, such as myself, I realized those rules might be impossible to follow.

Maybe that’s my problem, control, and order, but I’ve often heard people say “controlled chaos” perhaps that was something I could accomplish. Julia Child was an extraordinarily happy woman and if you think about it, following those rules you couldn’t really be anything but happy. I’m certain she would have looked at the closing of the bakery, not as a tragedy, but for just that, closing the bakery. “Move onto the next thing” or “Ok, what’s next” is what I imagine she’d say to me.

So what IS next? How will you step out of your controlled box and live your life without abandon, Gina? There’s a movie that Rob LOVES and I DESPISE “What about Bob”. I can go on and on as to why I hate this movie, and the top reason would have to be Bill Murray, but I digress. In that movie, the big thing was baby steps. That is how I will start living my new life without abandon, making things up as I go and making the most of the makeshift, baby steps.

The same wonderful Aunt who forced me to ask the question mailed me this book the first week I opened my bakery.  I have always felt, if you were a true “disciple” of Julia, you need to at least once cook her most famous recipe Boeuf Bourguignon. I opened the old Cookbook with it’s yellowed pages, and there it was! 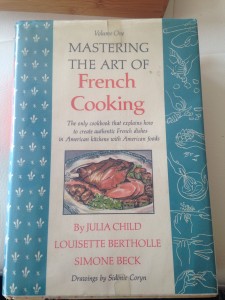 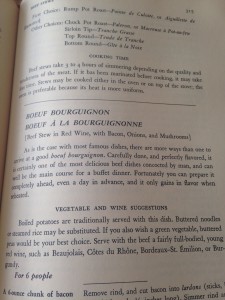 Now living with a vegetarian makes this project a little harder.  So I found out the schedule of the friend who has been the most supportive through this life changing time.  I decided that this recipe would have to happen next week. Which gives me time to ease into my new life without abandon!

Until then, I realized cooking calms me and cooking for people I love calms me even more. Alison is coming to dinner tonight, so I went with something familiar and nothing that requires a cookbook; homemade sauce and meatballs.

Adopting and adapting these new rules might be harder for me than closing my bakery, but I’m going to give it a try and see what happens.