Day 1 was a fog. I woke up crying at 4:30 am, fell back asleep and woke up for good at 6:30 am with an overwhelming sadness. I suppose I was in mourning for my little shop and my loyal customers (who left me so many kind words, all of which I read at 4:30 am while crying).  I once again had the familiar feeling that I was once again, at 47, looking for purpose in my life. Later in the day my husband and I decided we needed a distraction, so we went to see the movie 100 Foot Journey, and when it dawned on me that it was about a chef, I cried again. Eventually, yesterday the crying stopped, I took a Xanax, crawled into bed, meditated and fell into a sound sleep, which brings me to Day 2 of “What the fuck now”!

After coffee, toast and conversations with Rob (who is also going through his version of “What the Fuck”), I laced up my running shoes and out the door I went, with Counting Crows new record blaring in my ears. I set out for some answers and with the hopes that the heat and humidity wouldn’t kill me.

As I rounded the far corner of the Titans stadium, I saw several Metro Police trucks with a strange thing hooked to the back. As I cross the street, so as not to be in the way, I see this. 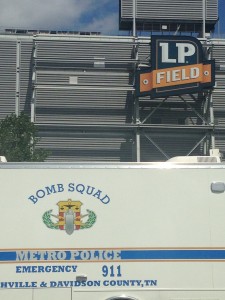 Ok, I think, life could be worse. I pick up the pace a bit because as uncertain as life is now, I’m relatively sure I don’t want to die by flying pieces of a stadium for a sport I despise.

As I’m crossing the bridge back home, I see in the distance an old homeless man walking towards me with a cane and a water bottle around his neck.   For a quick second I think, maybe I could ask for a hit off whatever was in there because I was so thirsty, then I thought, no Gina that’s just gross. As we approached each other he stops me, I pull my headphones out of my ears, and he points his cane in the direction I had just been and asks me if there is a church over there. I think to myself, sir I haven’t been to church in a good 20 years, how would I know. I turn towards the direction of his cane, and I see it pointing directly at a church steeple.

I’m not sure why that old guy made an impression on me, but he did. He was stating the obvious in the form of a question. I put my headphones back in my ears and the song “Possibility Days” was playing. “The best part of a bad day is knowing that it’s ok”.

I don’t know what the fuck is next, but I know it’s going to be ok.

3 thoughts on “Day 2 Of Unemployment And Self Realization”